Perceptron Agrees to Acquire COORD3 and Next Metrology 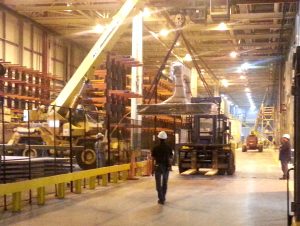 MAF is an 832 acre site owned by NASA in New Orleans and is currently a multi-tenant complex maintained and operated by Jacobs Technology.

The new COORD3 UNIVERSAL CMM was installed by Omni-Tech and replaces an older Fanamation CMM that Omni-Tech has been servicing at the MAF facility for the past 15 years.

The new COORD3 UNIVERSAL CMM will help MAF support its several major projects for the next generation of space transportation vehicles; including NASA’s Space Launch System (SLS) heavy-lift rocket.  This is a 321-foot, 5.5 million-pound rocket, managed by Marshall.  As well as the Orion spacecraft, managed by Johnson Space Center.  Michoud’s highly skilled work force is manufacturing and assembling Orion and also will build the critical core stage of the SLS, which is intended to take human explorers farther into our solar system than ever before. 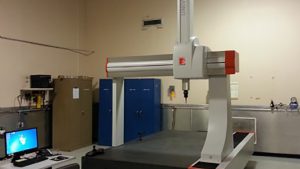 The COORD3 UNIVERSAL CMM will offer NASA an advanced alloy moving structure providing high dynamics and accuracy performances while achieving outstanding thermal stability. UNIVERSAL provides a flexible coordinate measuring platform, which allows use of point-to-point analogue contact scanning and laser scanning sensors.  Due to its structural rigidity, this is an ideal platform for full 5 axis scanning and gear measurement applications.   This advanced structure provided by COORD3 will give NASA the ability to expand its measurement capabilities well into the future and beyond.

To learn for about UNIVERSAL advanced feature select the link below.

HYUNDAI POWERTECH AMERICA INC. PURSUITS QUALITY PERFECTION AND IS NOT ACCEPTING THE SMALLEST OF ERRORS!

HYUNDAI POWERTECH AMERICA in pursuit of quality perfection has recently added a COORD3 UNIVERSAL 12.15.10 CMM with the latest Renishaw SP25 scanning probe system to solidify its quest to enhance its quality to less than the smallest of errors.  POWERTECH AMERICA located in West Point Georgia is a main auto parts manufacturer for Hyundai Motor Group, specializing automotive transmissions.  With the annual production capacity over 2.8 million cars, the company has a full line of transmission products from compact cars to full-size cars, and has been able to entrench its strong market position as a transmission specialist.

To learn for about UNIVERSAL advanced feature select the link below. 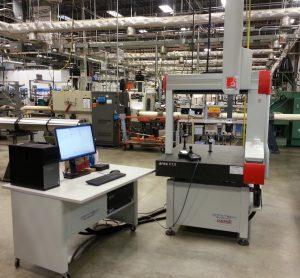 COORD3 partner Omni-Tech Corp. was proud to offer UTC Aerospace System the latest in touch probe technology with a COORD3 ARES NT 7.7.5 CMM which is equipped with the innovative Renishaw PH20 5-axis probe system.  Its small frame and light weight make it ideal for the shop floor environment.  Installation was complete by Omni-Tech V.P. Ian Harrison.

UTC Aerospace Systems Engine Component division located in Carroll, IA is one of the world’s largest suppliers of technologically advanced aerospace and defense products. They design, manufacture and service systems and components and provide integrated solutions for commercial, regional, business and military aircraft, helicopters and other platforms.  They are also a major supplier to international space programs.

To learn about the ARES advanced feature select the link below.

International Customers, Sales Partners and Suppliers celebrated with employees during the 2 day event help at the COORD3 HQ and manufacturing operation.

A celebration dinner was hosted for guests on the CMM assembly factory floor for over 200 guests creating a very unique setting.

Over 85% of COORD3 CMM production is exported from its Italian production facility.

An employee dinner was hosted a few days earlier where long service awards were presented including numerous 25 and 30 year awards.

A Menu of Microns

COORD3 opened its CMM assembly floor to become The Micron Café for the evening.

The celebration dinner featuring Northern Italian cuisine was complimented by a selection of fine wines and champagne from the region.

Angelo Muscarella toasted the 40 years of COORD3 and made a special presentation to the founding Berri family. Since taking the company back into family ownership in 2009 Muscarella has grown COORD3 into a Top 6 CMM supplier.

COORD3 is world renowned for its large Bridge and Gantry CMM machines. It is also a volume supplier of small and Medium size CMM’s and produces using a flow-line production technique.

While many Name Brand CMM’s are now manufactured in China COORD3 continues to manufacture its high technology alloy CMM competitively from its European operation. A COORD3 still means designed in Italy; manufactured in Italy; and inspecting customer parts with confidence world-wide.

COORD3 supplies its CMM products both directly to end users under the COORD3 brand and also to OEM partners including EROWA, NEXTEC, NIKON and ZEISS.

With measuring cross-section 650mm x 650mm the machine is aimed at the small and medium part inspection market and in particular budget for customers seeking an advanced CMM with outstanding performance.

Through its partnership with PECO USA COORD3 introduced its new range of Gear Inspection Machines.

The exhibited hybrid GMM allow both traditional CMM and Gear inspection to be performed using a common platform with flush mounted rotary table.

Launched last year the highly successful UNIVERSAL is a next generation of bridge CMM; the 20.15.10 model was displayed at the Open House measuring with Renishaw SP25 scanning probe.

COORD3 – OUR NAME IS OUR BUSINESS…

Omni-Tech is a leading 3rd party CMM service company specializing in the calibration and retrofit of CMMs as well as new equipment sales. Omni-Tech offers a full range of CMM products to its customer base including the complete range of Coord3 coordinate measuring machines.  Omni-Tech maintains ISO 17025 accreditation through A2LA, guaranteeing that our procedures are exceeding today’s industry standards. Omni-Tech is dedicated in helping customers increase the productivity of their CMMs through skillful service and support.